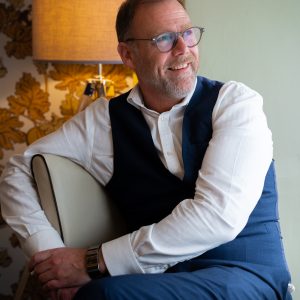 Gary manages the front of house and bar offering at Thackeray’s, working closely with the kitchen to ensure the experience is exemplary throughout.

Gary ended up in the restaurant industry entirely by accident. Having worked at a bakers through his school holidays he developed a keen interest in food, which later fuelled a passion for catering. However it was working in pubs & bars which really ignited his desire to pursue catering as a career.

Gary worked his way around the country in a variety of bars, clubs & restaurants until finally returning to the South East to help a friend run what turned out to be a very successful restaurant. When this was sold he moved into country house hotels as this seemed to be the best stepping stone to progress his career. However, Gary always saw this as a step on he ladder rather than a destination and when the opportunity came up to join Thackeray’s, alongside one of the best chefs in the South East, he took the opportunity with both hands. He’s now been here 15 years.

“What makes Thackeray’s stand out is our dedication to ‘the experience’. A lot of places will focus on one or two aspects of the offering, but not many are truly customer centric in every respect. That’s what we try to do.”

Born and bred in Kent Patrick started his career like most budding chefs washing pots at the local pub at the age of 15. At  18 Patrick went on to study at Westminster Catering College while working at Thackeray’s at the same time, not only honing his technical ability but also gaining invaluable vocational experience.

Patrick joined Thackeray’s as a commis back in January 2010 at 18 years of age under the guidance of Head Chef Chris Bower, quickly working his way up the ranks and after one year at Thackeray’s he went to sister restaurant The Hengist as Senior Chef de Partie. After 6 months he was promoted to Chef de Tornant of the group roaming around all four sites at the time. Patrick returned back to Thackeray’s full time in September 2011 when he was soon made Sous Chef in spring of 2012 at the age of 21, and was part of the team who won the Michelin star in the autumn. Working under Daniel Hatton for another 2 years as sous  chef then departing in the summer of 2014 to further his experience. He landed his first head chef role later that year and honed his skills to then return back to Thackerays in Jan 2017 to head up the kitchen and back to his old stomping ground!